(This article by Roberta Naas first appeared in her Perfect Timing column on Forbes.com.)

Just about a week ago in New York City, Zenith Watch Company celebrated the 50th anniversary of the famed El Primero chronograph caliber, and globally launched the El Primero Revival A384 watch. The new timepiece is an homage to the first El Primero—the world’s first automatic chronograph. 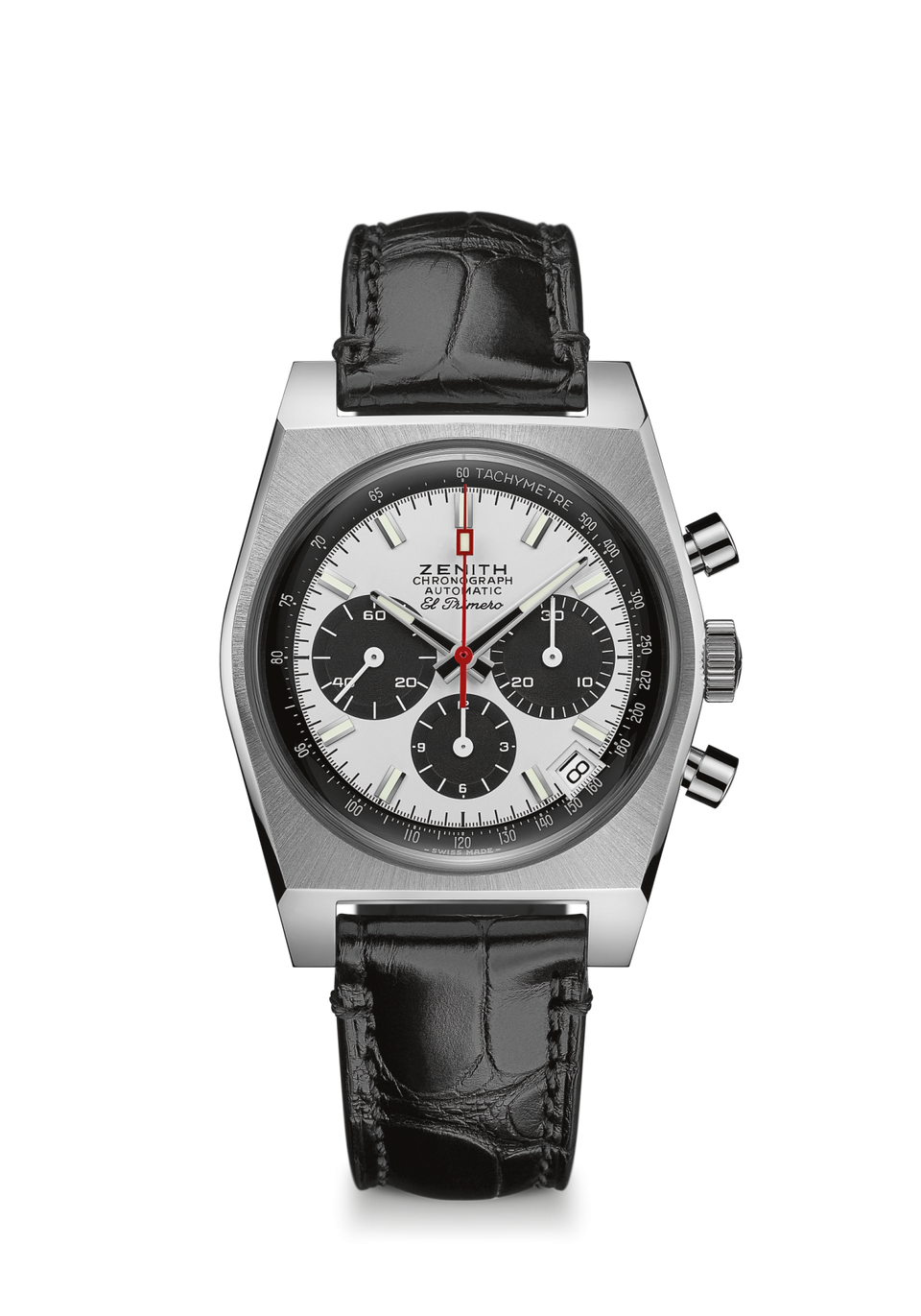 Fifty years ago, after years of research and development, Zenith released the revolutionary El Primero automatic chronograph movement with column-wheel mechanics, a high frequency of 36,000 vibrations per hour and the ability to measure time intervals to an accuracy of 1/10th of a second. The new 50th Anniversary El Primero Revival A384 watch is almost an exact reproduction of the original, but with some necessary updates.

“We can’t create an exact replica because times have changed and so has technology,” said Julien Tornare, CEO of Zenith, in an exclusive interview. “We use a new state-of-the-art movement, and we added sapphire crystals and an open caseback. Otherwise, the design is exact.” 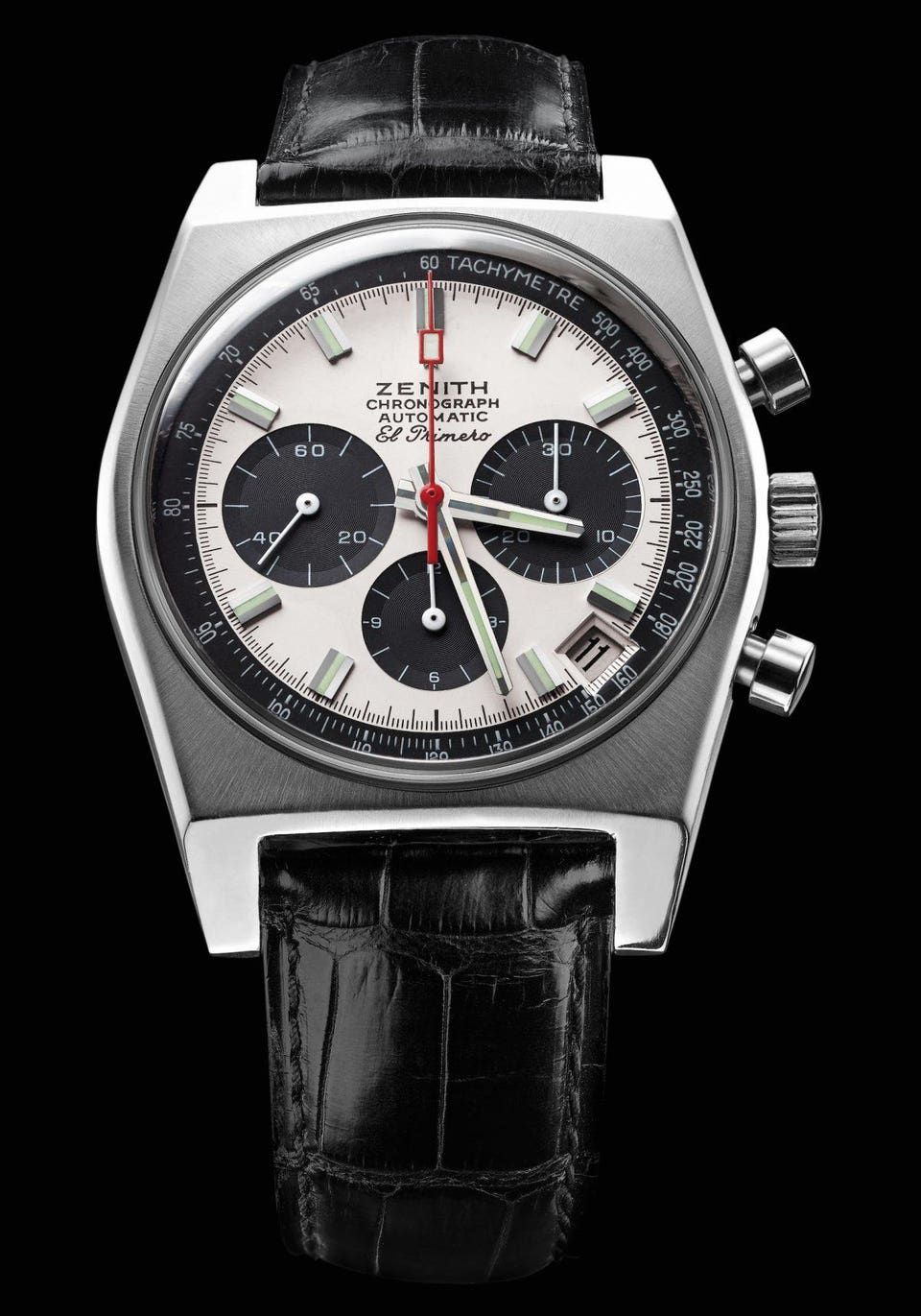 Tornare said the making of the new watch was more than a year in the research and development stages, and that just examining the original model to replicate it was not enough. In fact, to truly understand how revolutionary that first watch was, Tornare sought out the advice of watchmakers, product development managers and others who were on board with the brand 50 years ago and who were instrumental in the making of the original El Primero chronograph. The men, who ranged in age from the youngest born in 1945 to the oldest born in 1933, shed so much light on Zenith at the time, and gave Tornare a much better understanding of the El Primero. 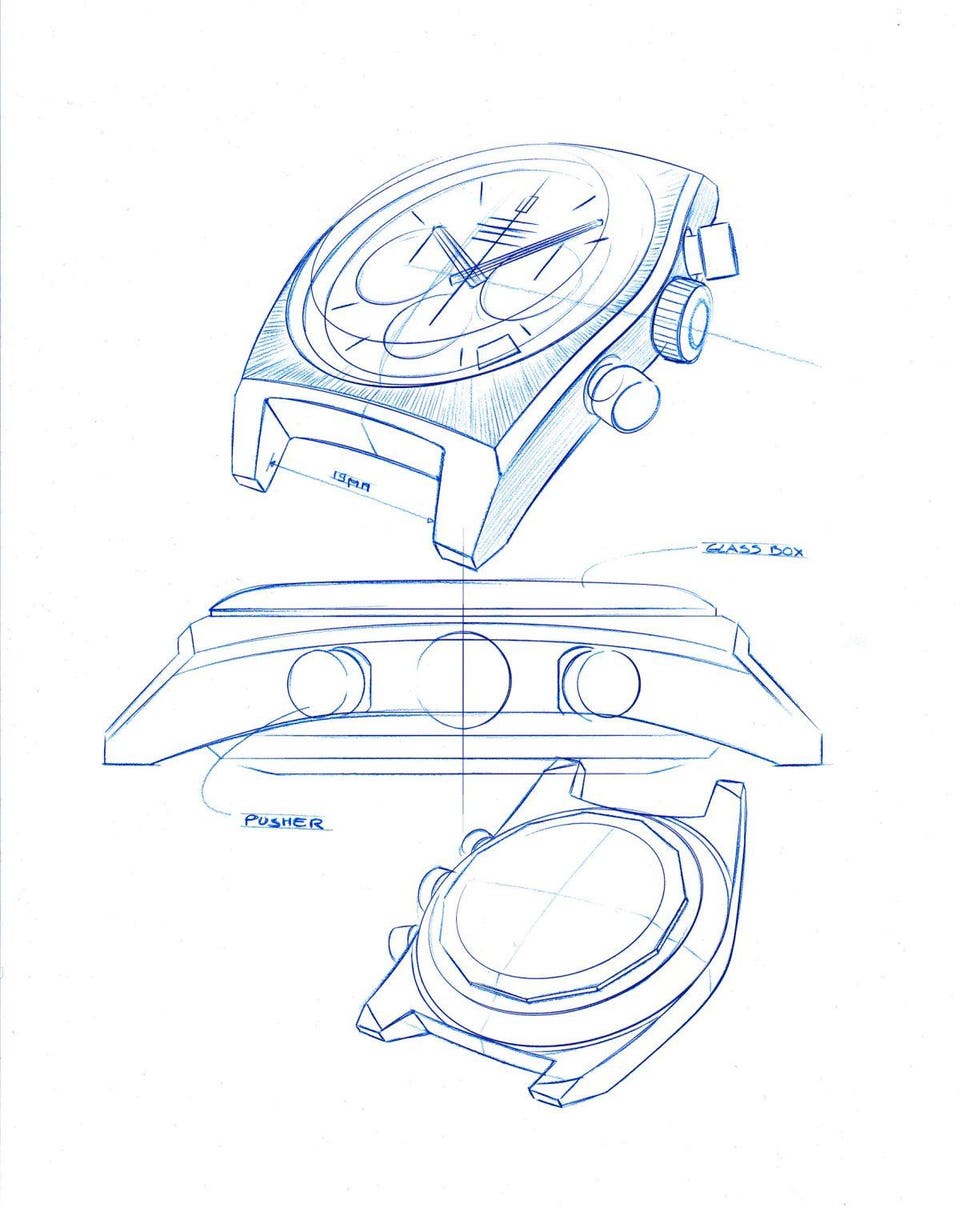 “Eight of them came together at a lunch meeting and I learned how they persevered in the making of the original. Each time they shared their ideas for a high-frequency chronograph movement, they were told they couldn’t do it,” says Tornare, indicating that the work of those people demonstrates how creative and visionary the brand was even half a century ago. “They were willing to push the boundaries, and that is inspirational. They showed me that already 50 years ago, we had an adventurous spirit.” 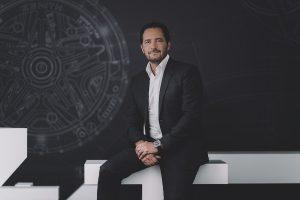 In fact, it took the original watchmaking team several years to perfect the movement, which they unveiled in January 1969. It stunned the mechanical watchmaking world and was an immediate success. (Today, the question remains whether the El Primero was actually the first automatic chronograph—as its name implies. The Heuer Caliber 11 came to the market a few months earlier as did the Seiko 6139, but the A384 movement was introduced first.) 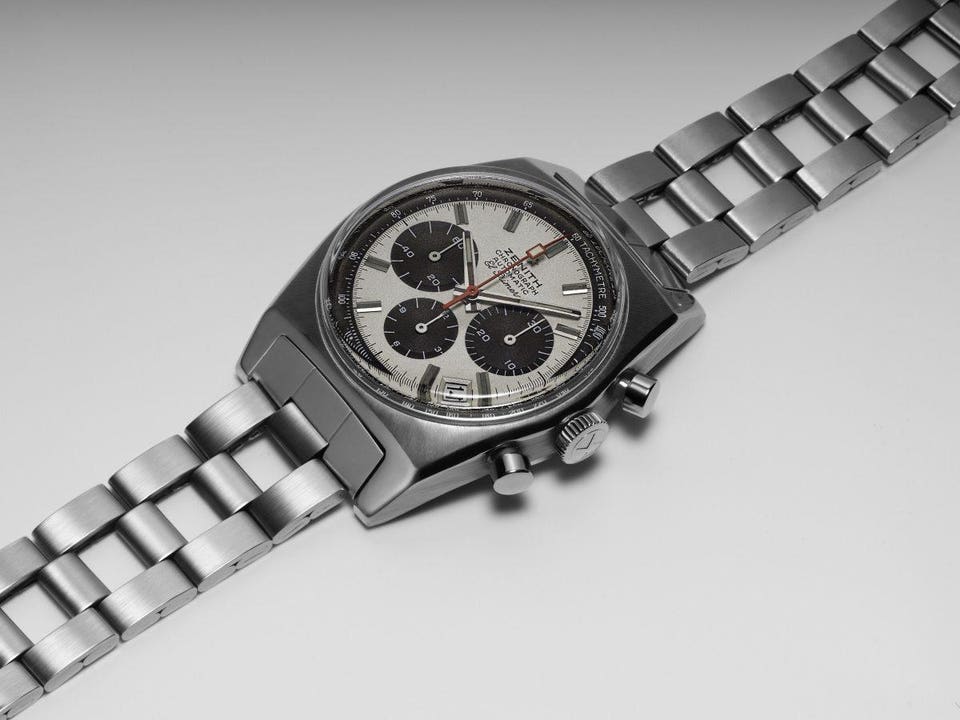 The first El Primero A384 watch featured a ladder-style bracelet with openings between the links. The new watch is also offered with a ladder bracelet.

Just a few years later, Japanese quartz watch took the world by storm, impacting the Swiss, who were slow to adapt to the new technology. The Swiss watch industry was in a crisis, with many brands scrambling to create their own quartz movements and with many others unable to sell their mechanical wares and closing their doors forever. In 1975, Zenith Radio Corporation, the American brand that owned Zenith from 1971 to 1978, decided to limit its production to quartz watches only. The metal presses and tools for mechanical watchmaking were to be dismantled and sold to an outside bidder.

One chronograph specialist who had put his heart into the development of the caliber—Charles Vermot– would not hear of it. Vermot stole away on nights and weekends to the workshops in Le Locle, and quietly and methodically began hiding the plans, the drawings, the tools and components necessary to build the El Primero in an effort to safeguard its history and future. In total he hid more than a ton of tools and presses, as well as hundreds of documents.

According to Charles Vermot’s son, Michel, who joined the event tonight to share some behind-the-scenes stories of his father’s involvement, Charles was so diligent in his quest to preserve the past that he disappeared evening after evening and weekend after weekend – leaving his wife to wonder if perhaps he was having an affair. In fact, he was single-handedly saving the El Primero mechanical chronograph. 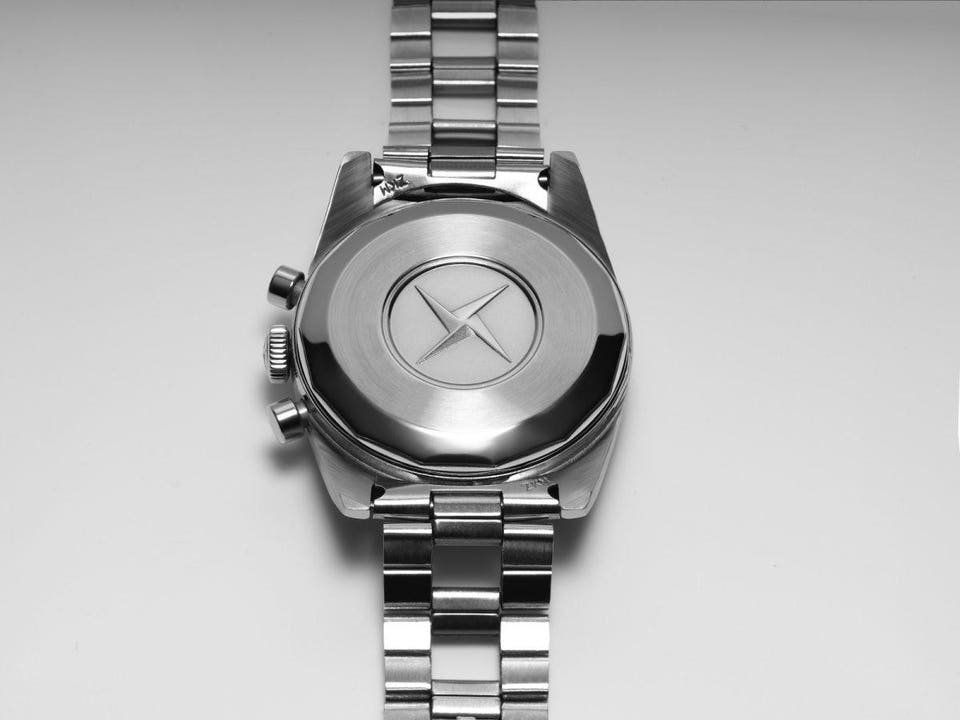 The original Zenith El Primero A384 watch from 1969 had a closed caseback with the brand’s famed star logo on it.

Years later, in the early 1980s, when the quartz crisis was over and people were once again taking a renewed interest in mechanical watches, there was talk at Zenith of bringing back the El Primero. A top watchmaker at the brand called Charles Vermot—who had since retired—to see if he could help. Vermot went to the factory and revealed that he had hidden all of the necessary materials for the making of the El Primero. Revival was imminent and the legendary chronograph relaunched in 1984.

Since then, Zenith has held steadfast to its position of creating high-frequency mechanical El Primero chronograph movements that can time events to ever-tinier measurements. In fact, to date there are approximately two dozen El Primero renditions, with some versions measuring time to 1/100th of a second (The El Primero 21 introduced in 2017) and one on the drawing board slated to make its debut next year that will measure to 1/1000th of a second. 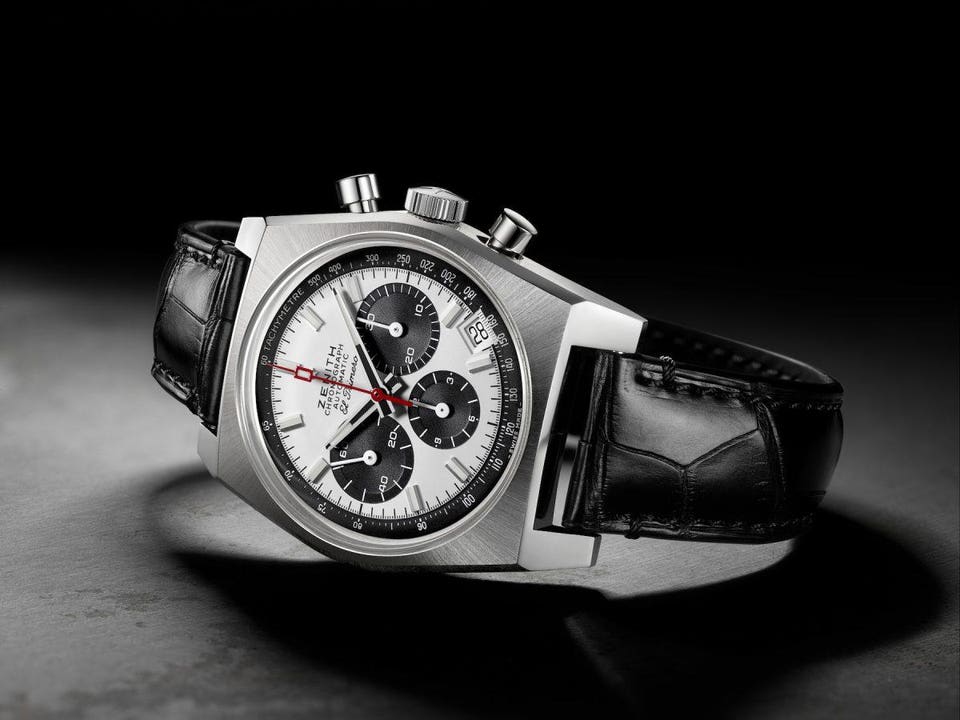 The Zenith El Primero A384 Revival watch is a nearly exact replica of the original, but with updated movement and sapphire crystal.

The newest El Primero A384 Revival is the final watch in the brand’s 50thAnniversary Revival series. It is historically accurate in terms of design thanks to a “reverse engineering” approach wherein the original watch was totally digitalized via a laser and then scanned to produce a proper three-dimensional conception of the watch. The entire process took just over two weeks – and yielded a highly accurate presentation of the original watch.

While the 37 mm faceted matte-finished steel case and lacquered white and black tachymeter dial are an exact replica of the original, the new timepiece is fitted with the current 278-part El Primero 400 chronograph movement and sports a sapphire crystal instead of the acrylic glass indicative of that era. Additionally, the case back is now transparent allowing for a view of the movement. The watch is offered with either a black leather strap with rubber lining, or with an integrated metal “ladder” bracelet option that recalls the original, which had open spaces between each link. The ladder bracelet is extremely special, and has not been replicated until now. It gives the watch a truly vintage appeal. 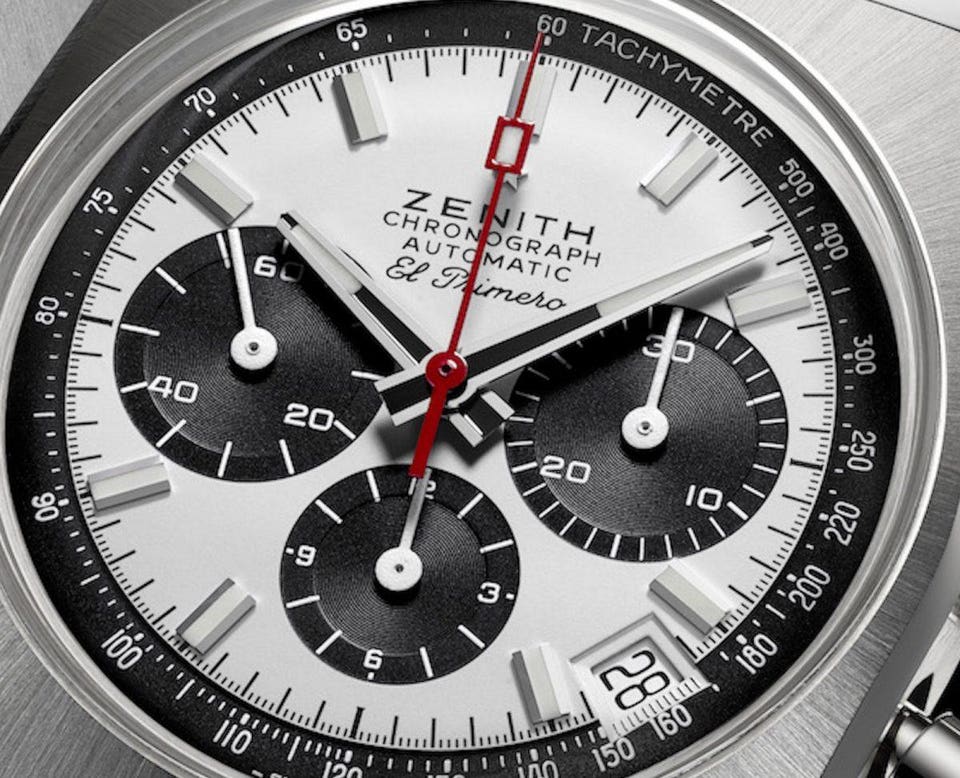 hronograph times to The new Zenith El Primero A384 Revival watch offers chronograph with 12-hour and 30-minute totalizer, with a central chronograph hand.

The El Primero 400 caliber beats at 36,000 vph and features hours, minutes in the center, and small seconds at 9:00. The chronograph can track intervals of time up to 12 hours and 30 minutes, and has a central chronograph hand. There is also a tachymeter scale on the outer chapter ring of the dial and date indication at 4:00. The dial has SuperLuminova SLN C3 hands and markers. Crafted in stainless steel, it is water resistant to 10 ATM. The new watch—which will retail for $7,600—is not being released in a limited edition (as the other previous Revival watches have been) so it can be accessible to the public.