Was $150,000 Paid For Urwerk Watch Worn by Robert Downey Jr. in Spider-Man Enough?

Just last week on my Perfect Timing column on Forbes.com, I wrote about the Urwerk watch worn by Robert Downey Jr. in the Spider-Man Homecoming 2017 movie — the Urwerk UR-110 RG — selling for $150,000. The thing I have been thinking about is this: was that $150,000 really enough? Truth be told, a brand new version of the Urwerk UR-110 RG sells for $115,000. That said, someone, I think, got a real bargain and now has a watch with a very interesting provenance that he or she can sell at retail in years to come for a  lot more money.

The value behind the watch is not just that it belongs to one of today’s iconic actors, but more importantly is the fact that Robert Downey Jr. wore the watch in the movie in his role as Tony Stark. That will be the provenance that will secure a strong resale value. If one examines watches worn in movies and decades later sold at auction, you will find this to be the truth.  So, at the recent  Phillips, in association with Bacs & Russo, auction the sale of the Urwerk UR-110 RG watch was — in my opinion– a steal.

Urwerk UR-110 RG sold at auction for $150,000. It was the watch worn by Robert Downey Jr. in Spider-Man Homecoming last year.

Of course the sale of that watch went to benefit the Manusodany organization, a non-profit  involved in projects that  promotes literacy among disadvantaged children in Haiti. When the one worn in the movie went up for sale, Urwerk created a duplicate 18-karat rose gold and black titanium version with bright yellow numerals and accents for Robert Downey Jr.
The UR-110 Torpedo uses Urwerk’s unusual system of orbiting satellites to indicate the time on the right side of the watch.  The watch is equipped with three hour-satellites (arrow-shaped torpedoes) that follow a vertically arced line, graded from 0 to 60 minutes, in a downward motion. A planetary gearing keeps the satellites turning to indicate the time as they pass the 60-minute track. The complex movement also consists of a central carousel and three counter-rotating hour modules. A larger panoramic sapphire crystal enables easy viewing of the complex architecture of this mechanical watch. 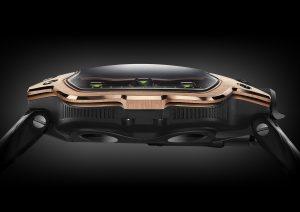 Additionally, the watch offers indications for Day/Night and for “oil change” — meaning the time left before the watch needs servicing. The mechanical UR 9.01 automatic movement offers 39 hours of power reserve and the watch is water resistant to 3 ATM. While the versions worn by Robert Downey Jr. are spoken for via the auction and his personal piece, Urwerk makes this watch in multiple other materials and colors– retailing for about $115,000.