Harry Winston unveiled the New York Collection at the Rainbow Room in New York, with sections of the room dedicated to the city spots that inspired Harry Winston.

Last week in New York city, Harry Winston unveiled its newest New York Collection of unique pieces of high jewelry. The collection was three years in the making and the suites are all reflective of Harry Winston’s  New York. Born in 1896 in New York, Harry Winston grew up as the son of a small jewelry shop owner. He lived his life in NewYork, met his wife, Edna, there, commuted by trains to many places to procure the stones that would make him and his brand a legend. When he founded Harry Winston in 1932, he could not have known the long-lasting and incredible impact this “King of Diamonds” would have on the world.  Now, to pay homage to him and to the city that inspired him, the designers at Harry Winston have created the New York Collection of one-of-a-kind suites of high jewelry.

There is one timepiece in the New York Collection, as well. It is part of the 718 Marble Marquetry sub-collection that is inspired by the black and white marble marquetry floor in the brand’s flagship store at 718 Fifth Avenue. It is an octagon-shaped case set entirely with diamonds, as is the dial, and surrounded by a floral motif bracelet set completely with diamonds and blue sapphires.

I covered the unveiling of the collection in my Perfect Timing column on Forbes last week, now I bring you that article for a closer look at the New York Collection:

“It was like a wonderful walk through New York City last night at the Rainbow Room in New York. To launch its newest   New York Collection of high jewelry, Harry Winston transformed the Rainbow room with individual vignettes of some of Harry Winston’s favorite New York City stops, including a ticket booth as seen in Grand Central Station, an incredible stained glass and candle backdrop reflecting St. Patrick’s Cathedral, a stroll through Central Park and even a stop at Winston’s own Brownstone doorstep on the upper West Side.  With a star-studded audience, a train conductor walked guests through Harry Winston’s incredible journey — building one of the most spectacular jewelry brands in the world in 1932– in the heart of New York City. The night was capped with a lively performance by Grammy and Academy Award winning singer Jennifer Hudson who was naturally bedecked in nearly 100 carats of diamonds set in platinum. 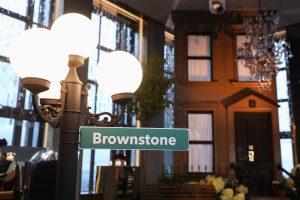 One of the New York sub-collections, Brownstone, pays tribute to the Upper West side brownstones. (Photo C: BFA)HARRY WINSTON

While the lights of New York City glistened outside the Rainbow Room at Rockefeller Center, the lights were equally as bright inside thanks to the incredible jewelry that was on display around the room. The New York Collection was three years in the making and includes pieces that pay homage to Harry Winston’s favorite places and to the architectural beauty and glamour of the city that never sleeps. 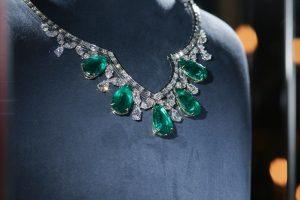 Each sub-collection  has a special significance relating to Winston and the city. The Brownstone, for instance, pays tribute to the beautiful brownstones of the Upper West Side where Harry was born and lived. The pieces in this series include meticulously set baguette- and marquis-cut diamonds, as well as  round brilliants  and  square-cut gemstones in a geometric motif.

Another significant suite is the Cathedral sub-collection. Because Harry Winston’s first location was opposite St. Patrick’s Cathedral, he was regularly inspired by the choir songs he could hear in summertime, but the incredible architecture and the stained glass windows. As such, this collection includes an incredible Cathedral Necklace and Earrings with pear-shaped emeralds and diamonds. 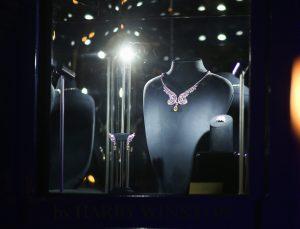 Other pieces fall into the City Lights category that re-imagines Broadway with vivid precious stones and diamonds, or the Central Park Mosaic sub-category inspired by the lush gardens and ponds of Central Park . In this suite of  earrings, bracelet and rings, diamonds, emeralds, sapphires and aquamarines are set in a mosaic pattern designed to recall the park’s splendor in summertime. There is also an Eagle suite that pays tribute to the famed Eagle at Grand Central Station. The pieces emulate wings in flight and are created using both colorless and fancy yellow diamonds that Winston was known for. The 718 High Jewelry suites and the 718 Marble Marquetry suite pay tribute to the brand’s Maison at 718 Fifth Avenue, where it moved in 1960. The building was a masterpiece, as well, with French styling, elegant details, black and white marble foyer floor and incredible chandelier. The sub-collections of the Harry Winston New York Collection that pay tribute to that building recall the ornate gold-plated vitrines that showcase the jewelry, the marble marquetry pattern in the floor, and more. 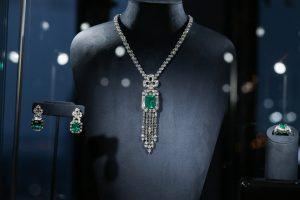 Every piece in the collection is a one-of-a-kind work of art and a masterpiece that celebrates one of the greatest cities on Earth, and the man who built a legend. No prices were disclosed, but the pieces are currently on display at Harry Winston’s Fifth Avenue Boutique.