With the year 2018 coming to a close, we reflect on some of the brands that celebrated in style this year. One such brand is Frederique Constant, a Swiss brand built on the relationship of value and quality. Just 30 years young, Frederique Constant has, nonetheless, put an indelible mark on time.  A few months ago, I traveled with the brand to Paris for its anniversary and for the unveiling of its limited edition Perpetual Calendar Tourbillon Manufacture timepiece. The celebration solidified for me that this once independent brand (purchased by the Citizen Group in 2016) is not done growing. 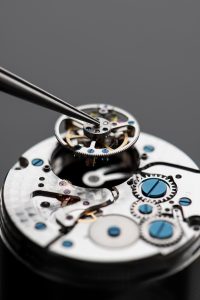 At a celebration taking place at the renowned “Le Faust” — next to the breathtaking “Alexander III” bridge – Peter and Aletta Stas-Bax, co-founders of the brand, outlined how this once tiny company has grown to become a fully integrated Manufacture in Plan-les-Ouates, Switzerland. Of course, having been in the industry since the early 1980’s, I was there when this brand was born, and when it showed for the very first time at Baselworld. In fact, I may have been the first interview Peter Stas ever gave to an American journalist.

Over the ensuing three decades, I have watch this couple pour their hearts and souls into creating a brand that has remained true to its ethos: give consumers great quality and value at an affordable price. They began making their own watches in 1988 and selling them in small batches and numbers that totaled a few thousand. However, the looks were strong and the concept caught on. As such in 1992, the brand Frederique Constant SA (an amalgam of both co-founders family members) became official.  Within a couple of years, the company unveiled its now-coveted Heart Beat collection that has an aperture on the dial and enables viewing of the automatic movement (an ETA caliber) within. 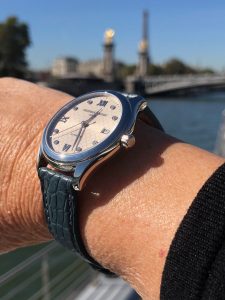 As the company grew, so, too, did the desire to create an in-house Manufacture caliber. So in the year 2001, the ambitions project was set in motion, and the brand turned to specialists from two watchmaking schools for help.  In 2004, the FC-910-1 hand-wound movement was released in a timepiece that featured an aperture in the dial at 6 o’clock to allow for viewing of the strikingly large balance wheel reminiscent of a tourbillon. A year later, in 2005, the brand’s moon-phase   FC-915 was born followed a year later by the exclusive automatic model called the FC 930. Also in 2006, the brand inaugurated a new Manufacture to create more than 80 percent of the components needed for its movements. The company was on a veritable roll. 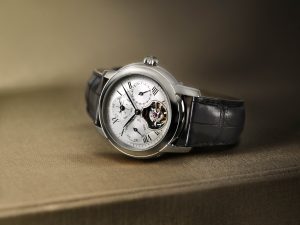 In ensuing years, Frederique Constant began its “Passion Award” to honor   outstanding entrepreneurial performance, and bestowed the honor on a host of people, including the USA’s American actress Eva Longoria. Additionally, brand began partnerships with vintage road rallies, Cohiba cigars, and others. Together, the couple launched a subsidiary sports brand, Alpina, and later Atelier de Monaco with Pim Koeslag, chief engineer and watchmaker. As recently as 2016, the brand signed on American actress Gwyneth Paltrow as its official Charity international ambassadress, and has since raised significant amounts for Paltrow’s charities of choice. 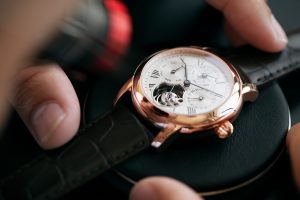 Today, Frederique Constant produces 27 calibers from the simple to the sublime, with moonphase indications, calendars, world timers, chronographs, tourbillons, and more as part of its repertoire.  It has even unveiled a Hybrid Manufacture smart watch. In fact, the brand creates about 160,000 watches annually.  And, to  celebrate its birthday, the brand released four new limited edition grand complication perpetual calendar tourbillon watches. The 188-part movement, FC-975, is entirely made in house.

“The development of the manufacture calibers was one of our biggest achievements, and also the building of the manufacture itself,” says Peter Stas, co-founder of Frederique Constant. “I think once the industry saw that big gray building go up, with our logo on it, they realized, ‘hey, something happened here that we are not fully aware of.'”

In fact, he notes that since 2005, the growth of the brand has been exponential.”We started with a business plan that was realistic, we worked on our own and had only two friends with a small percentage invest. We always believed that if we made something that looks good at affordable, accessible prices, it will sell. This is what we did step by step.”

Of course, along the way, Stas had the foresight to investigate the smart watch trend, and to establish a new company, MMT (which he still owns), to tend to the smart watch technology not only for the Frederique Constant brands, but also for other watch brands as well.